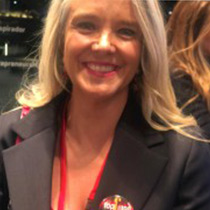 Carlota Lorenzana is the current General Manager of MURALTO. She holds Bachelor’s degree in Business Administration from the Wales University (UK), Master in Tourist’s Services Commercialization from the University of Cantabria (Spain) and Superior Hotel Management Program, Madrid (Spain).

In addition, she has completed her academic training with other variety programs like Programme leader – entrepreneurs of the community of Madrid, programs from the CEU University as Social Media Business, among others.

Since 2002 she has developed various management responsibilities within the Aparto-Suittes Muralto in Madrid (Spain). She co-founded nine new restaurants in Madrid in the last ten years: Casa Mono, La cantina del Ateneo, Martinete, El Pelicano, Casa Gato, all situated in the city of Madrid. And Renato, Los Perez Farm, Club Molino & Xiringuito on the outskirts.

She has held various positions at Muralto as general manager, director of Human Resources Development and the position of Marketing, Communication & Corporate Affairs Director.

She currently combines her work in Muralto with her role as member of several management associations like ASEME, the Business Women’s Association in Madrid and AEHM, the Hotel’s Association in Madrid.  In addition, she is a partner of WA4STEAM, an international community of women investors who seek to increase the presence of women entrepreneurs in the STEAM fields.