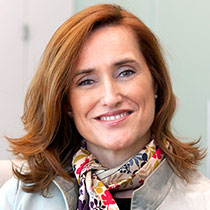 I am passionate about creating and leading high-performing teams that meet their full potential and generate true value for the company, employees, shareholders and society.

I have 27 years of experience working at large corporations in the Healthcare and Chemical sectors. I began my career at Roche as Commercial Director for Spain and Portugal. In 2006 I joined Guerbet as General Manager in Spain, I held various positions at Schering Plough and Serono, where as a Senior Vice President I was responsible for North & South Europe.
One major achievement of my career was leading a successful integration process with Merck, and later being appointed CEO of the Merck Group in Spain. In Dec 2011, I was named President for Merck Latin America, based in Brazil.

Among much recognition, I was the first woman and still am the only woman to receive an award from the Chamber of Commerce of Madrid, as Executive of the Year in 2007. In January 2016, I received an award for “ElTalento Ejecutivo”​ from the prestigious Financial Newspaper “cincodias”​.

From 2014 to 2016 I have served as President of Bayer HealthCare Pharmaceuticals for Latin America, based in the United States.

Currently I am an independent board member for Events SL, Calidad Pascual S.A., Foundation Adecco and Viscofan, adding valuable expertise and knowledge to these corporations. Serving as member of the Nomination and Retribution Committee.

I am Member of prestigious organizations as CWD, ICA and Circulo de Empresarios.