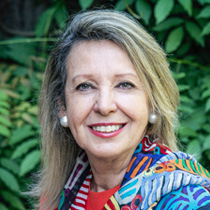 Margarita de Cos is the ChairWoman of the GLOBAL SUMMIT OF WOMEN for Spain and member of its International Planning Committee (IPC).
She was appointed to the Board of WWF Spain in June 2018, after many years serving as Head of its Major Donors Program at WWF Spain (World Wildlife Fund). Previously she worked in the private sector, being member of the Board of Directors of several Spanish companies, and held different executive positions such as CEO of Rainsoft SL (IT&Software development), Director and General Manager of Fábrica Española de Confecciones, S.A. (manufacture of military uniforms), Manager of energy developments in FECSA (electrical company of Catalonia, Spain), Manager of corporate and foreign investment in Bufete Soler Padró (Law offices) and Managing Director of INAC, S.A (Clinical laboratory firm).
Ms de Cos is “Licenciada” in Political Sciences by Universidad Complutense, Madrid (Spain) and Master in Economics (M.A.) by Carleton University, Ottawa (Canada) She is member of the Spanish Board of the International Women’s Forum (IWF) and of the Board of the Spanish chapter of the European League for Economic Cooperation (LECE). She is also member of the Asociacion Española de Directivos (AED),
Ms de Cos was born in León, Spain (1951), is married and has 2 children and 5 grandchildren