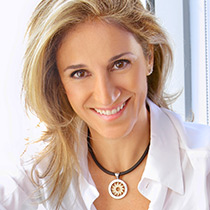 After more than 20 years practicing law in New York city, Maria Gonzalez-Manes returned to Spain in 2018, her country of origin, where she is now the director of Innovation and Business Development at the firm Ejaso-ETL Global.

Maria’s trajectory as an international counsel includes Law firm and in-house experience advising clients on a broad range of legal and strategic issues with a focus on cross-border transactions in the U.S., EMEA, and Latin America. She has held executive and senior roles in leading companies including Hewlett-Packard Company and Capital One Bank.

Committed to entrepreneurship and impact investing, Maria is an Angel Investor in several startups in the new technologies sector, a Limited Partner at the European group Rising Tide, a fund that strives to increase women’s participation in early-stage investing, and a member of the think tank for UnLimited Spain, a foundation devoted to transform society supporting startups dedicated to social impact.

She is also a member of the Board of Directors and Head of Investment and Partnerships at Madrid’s sustainability project Madblue, and Board advisor to a financing company.

In 2008 she also founded an e-commerce company in the United States and became the exclusive distributor of one of the leader children shoe manufacturers in Spain.