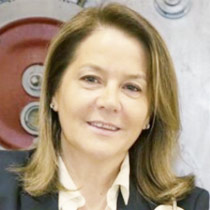 Viruca studied Marketing and Public Relations. She worked as a Press Spokeperson for the political party Unión de Centro Democrático (UCD) and for the President of the Xunta de Galicia.

She was the government delegate for the Xunta in Madrid. Section Manager for Social Events at the ABC newspaper, and major reporter for the Costa del Sol area.

She is currently Director of the International club of Marbella. Chairwoman of Europe House of Marbella. Collaborator. Tertulian in the radio station ONDA CERO. Manager at Gestoría Bocanegra, experts in foreign affairs.

In 2016 she published her first novel “El fuego del flamboyan” (The fire of the flamboyant).